Yagi Calculator is a Windows program (also runs well on Linux - Ubuntu 8.10 under Wine) to produce dimensions for a DL6WU style long Yagi antenna. Long yagis are commonly used from the 144MHz amateur band to the 2.4GHz band. The DL6WU yagi is highly regarded as being easy to build with repeatable results, broad bandwidth and a useful pattern.

The program on this site was developed in the early 90s as a DOS program. Time moved on and so did operating systems, so the 2003 version was an opportunity to convert to a Windows environment and update the information and modify some of the algorithms. The latest version is 2.6.4 (14 January 2010) with an added dimension for the folded dipole construction. Recent versions added allowance for square or round booms, round, square, flat elements and some impedance calculations. I have also added an "Insert To" distance being the distance from the tip of an element to the edge of the boom to help in construction. There have been minor fixes to improve reliability in different machines and better program flow. No changes were made to the essential algorithms apart from the additions needed to cater for alternate boom and element material shapes and the provision of "through the boom" folded dipole calculation. If you run Vista I recommend you run it as Administrator.

Example printout of a 2M design

Download and view the Windows Help files for Yagi Calculator

Download Yagi Calculator including the Help File
Click link to download. This setup file is approximately 700K, run it to install Yagi Calculator (Version 2.6.4)
Note: On 14 January 2010 I uploaded V2.6.4 with added dimension for folded dipole. Version 2.6.3 provided an improved impedance calculation, while 2.6.2 fixed a printout error when using insulated elements - the wrong boom diameter was being printed. Version 2.6.1 in January corrected an error in the coax.dta file that caused YC to ignore the 1296MHZ data on the SWR form. Also took opportunity in January 09 to tidy up the printout screen to make spacings less confusing.

I strongly recommend that you first uninstall any previous version via the Yagi Calculator start menu short cut and also ensure there is no old copy of YAGISETUP.exe in your internet cache. If your download has proceeded well it should install 2.6.4 not an earlier version. 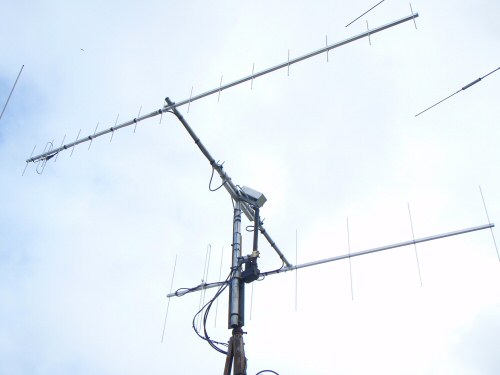 My satellite system used Yagi Calculator for design on 435.5MHz and 145.5MHz
(strictly speaking the 2M beam is too short to be a DL6WU but it works fine, both beams have very good SWR)

Amateur and commercial manufacturers have made use of the Yagi Calculator to create effective yagi antennas. The examples below are of yagis built using the program and constructed by a non technical person to solve a communication problem in a commercial environment. I have shown this as an example of the non critical nature of the antenna.

A successful yagi built using a fibreglass boom and 'knead it'. I've suggested the builder uses silicone to seal the material as it looks porous.

The pushnuts used by Steve to fasten the elements
He bought his from http://www.pinrestore.com/Hardware.html

It can be seen that the antenna is quite flat across a fair frequency range and the low loss coax should still deliver about 6-7 watts to the antenna.

Observations: The boom seems to be a bit on the large size and may be outside the equations used to calculate the boom effect on element length (I haven't checked the measurements), additionally the presence of the fat heliax may also be influencing things but the bottom line is that the yagi works very well in practice.

Yagi Calculator is a program to assist with the design of long yagi antennas. It uses the broad principles developed by DL6WU and printed originally in the German Radio Magazine VHF Communications (March 1982). The article was titled Extremely Long Yagi Antennas.

The author acknowledges the 1998 ARRL Handbook for information on coaxial cable impedance, dielectric and velocity factor.
Yagi builders are reminded that DL6WU designs are primarily for long yagis. A boom length of 2 wavelengths (or 10 elements) would be a minimum sized antenna. On the other hand, yagis with as few as 8 elements have used the design and worked very well.

I wish to acknowledge Kevin Schmidt W9CF (http://fermi.la.asu.edu/w9cf/) for the correction factor for square section rod of 1.18 * cross section of round tube and also for the formula to find the equivalent round cross section for both square and flat element materials (Version 2.5.0)