As one of a number of alternatives to the AS5040/AS5045, the shackunit accommodates use of a potentiometer at the antenna. This offers accuracy within a few degrees, depending on its linearity/quality. The actual Analogue/Digital conversion in the shack unit is able to decode one part in 1024 but most potentiometers are not this accurate. Simply connect a linear potentiometer to the DB9 (pins 4 and 5 with the wiper to pin 8) and set the menu item of the shack unit to 10 bit for the appropriate port (menu items 25,26). Rotators vary in the wiring of the potentiometer. Some are wired as a true potentiometer with floating wiper, others such as my CDE44 (and the Ham M and family) are wired as potentiometers but with the wiper earthed. If it is possible to replace the pot you will get better performance by using a hall effect solution such as those described elsewhere in this website. However for those with broad antennas or existing rotators the existing pots/rheostats are a workable solution for satellite use.

It was easier to isolate the centre rotor of the pot in the rotator to avoid using a constant current source. In addition I found that putting a 10uF from the wiper to the earth connection seemed to smooth things out a bit and it helps a lot to set averaging on too - that's menu item 27 in earlier versions and 28 (static) and 29(moving) in more recent versions. A potentiometer from 500 ohms to 4K7 linear would work satisfactorily. Too high a value may result in increased error as the load impedance of the A/D input to the 18F4620/18F4685 becomes significant.

The AZ/EL board is not required for potentiometer use. 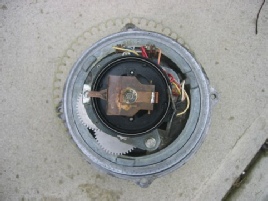 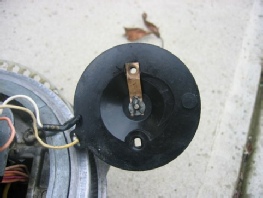 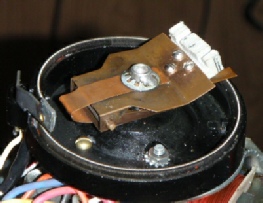 My most recent project has been to get my satellite system working. I have used my old CDE44 rotator - the small brother of the Ham M and similar rotators for azimuth rotation. Like the Ham M it has a large wire wound potentiometer at the top of the rotator actuated by a molded slot in the dome section.

I experienced a very frustrating time when I hooked the pot to my beam rotator system and suddenly the voltage on the wiper disappeared. At that point I examined the circuit of the CDE44 more closely and I had overlooked that the wiper of the pot is earthed. Floating the power supply of the 'shack unit' partially sorted the problem but it was unreliable and there was severe jitter of the readings when the rotator motor was turning. Some work with a CRO showed that there was almost 1/2 volt of AC superimposed on the DC voltage coming back from the pot caused by an earth loop within the system. The solution was to modify the rotator and isolate the pot wiper from earth.

There are two earthing points for the wiper of the pot. One is under the pot and consists of a flexible piece of metal held by a circlip and attached to the body of the rotator by the pot attachment bolt. It is easily seen when the pot is unbolted from the body. Two nuts with star washers hold the pot on.

A simple modification is to rotate the flexible piece of metal about a quarter of a turn and drill a hole to fasten it to the plastic of the pot body with a new bolt/tag/washer/nut. I used a Dremel milling bit to remove a small amount of the plastic from the top side of the pot body to ensure a bolt head (3mm or 1/8 in) would sit flat. A wire is run from this now insulated point under the pot to terminal 2 on the connection strip at the bottom of the rotator. In a CDE44 there is no brake solenoid and this terminal is unused. If you use this mod on a Ham M or similar you will need to find another way of terminating the new wiper connection as terminal 2 is used for the brake solenoid.

Next, you have to overcome the accidental earthing of the wiper through the driving mechanism of the wiper. The original design has an upturned lip with slots that fit into the dome when the unit is assembled.

For this part of the modification I found it easier to remove the wiper mechanism from the pot by removing the circlip (be careful - don't let the circlip shoot off, never to be found again). Next cut the lip from the drive piece (tin snips work OK) and then construct a plastic replacement for the drive lip. I used a hard teflon like plastic that cut nicely and I was able to make an 'L' shape that could be bolted to the wiper drive assembly. See photo. I used careful measurement and use of a hacksaw blade to create the slots forming a better than original drive mechanism. I tested that the piece of plastic located nicely in the dome slot before fastening it with three 2mm bolts/nuts to the drive metal sheet.

It all went very smoothly and the system now works really well. Because the system is used for satellite work I did not need the ultimate accuracy so hysterisis of the azimuth section of the beam rotator unit is set to 3 degrees. In my case that stops hunting.

Right: Under the pot showing the earth strap in its original position

Lower left: The new plastic drive system at right. At left can be seen

the added brass bolt holding the earth strip to the plastic body.