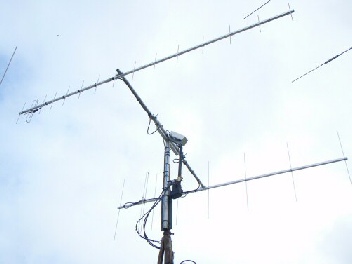 I use Orbitron to calculate the satellite position and my program Remote (Self extracting) or here ( ZIP file) to communicate between the computer and the shack unit.

To get the best out of the system use the latest shack software version greater than Version 8.1. I use a potentiometer for azimuth and a SCA61T inclinometer for elevation. 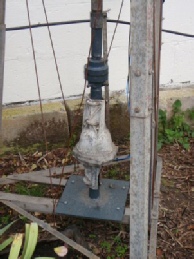 Left: The old CDE rotator that was modified to remove the earth connection on the pot to overcome serious noise problems. Note the rubber universal joint to overcome any alignment problems. Thanks to Chris VK5MC who found it in his machinery shed.

Right: is the circuit board of the SCA61T inclinometer chip. See below for details on how this may best be mounted. The photo shows it in a test jig. 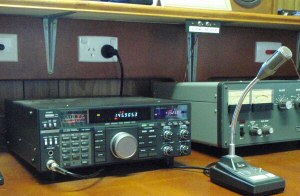 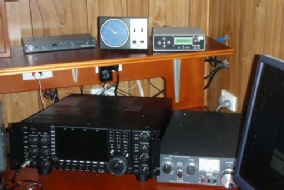 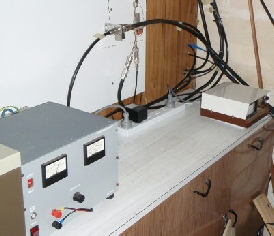 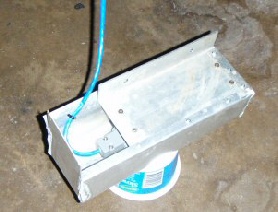 Top right: The completed antenna system for 2M/70cm satellites. Both yagis are based on the DL6WU design produced by my Yagi Calculator program. The 70cm antenna is a 16 element one with an estimated gain of 14dBd while the 8 element 2M yagi has an estimated gain of 10.4dBd. The screwjack provides elevation movement of about 100 degrees. The aluminium box at the top covers the SAC61T inclinometer encoder system described elsewhere on my site. Readout is more than adequate for satellite work and the antennas in use. The photo makes it look as if the antennas are not aligned, it's an optical illusion, they are.

Thank you Stan LZ2STO for the 18 inch screwjack. It provided the incentive for me to finish my satellite system. Thanks too to Seb DG5CST for the inclinometer chip.

Left: the rotator corner with my controller in the top right hand corner. I’ve recently replaced it with the 4 line version.

Right: The SCA61T elevation encoder is in a plastic box, in turn inside a weatherproof aluminium container.

Left:The operating position showing the TS790A for 2M/70cm. Just showing to the upper left of mike is relay switching and LED display of antenna in use.

Right: The power supply for relays and preamps and old CDE 44 control box for the rotator live out in the shed.