A project to remote control devices such as antenna selection, fan operation, etc at repeater or beacon sites using DTMF. Creative visitors will think of other applications.

Repeater and Beacon sites are often some distance from those who must  maintain or supervise the equipment. Many of us have trekked up steep hills/mountains or driven large distances in sometimes inclement weather to fix a problem that may well be fixed with a simple remote control. On some sites it may be necessary to switch on fans, swap antennas, or change encoders for telemetry. It’s much easier by remote.

The project described here can exist as a separate project running from a receiver (shared or otherwise) or be integrated into the VK5DJ Repeater Controller.

It began with an idea by Dave Robinson WW2R who produced a remote control board and described it on his site: http://www.g4fre.com/dtmf.htm

I have used Dave’s circuitry, well most of it, and rewritten the PIC16F628A code for a different solution. In the PDF of the circuit forming part of this project I have shown how either the DTMF decoder chip M8870 or the MC145436 may be used. Both work equally well. Dave’s board used a MT8870 DTMF decoder, a 16F84 PIC, a ULN2803 Darlington Driver, a bar LED, a resistor array and a handful of other bits. I use a PIC16F628A and provide an alternative DTMF decoder, the MC145436. The PIC16F628A is cheap and readily available.

The remote control provides 1-7 individual outputs that may be either high or low until intentionally changed or, 1-7 pulsed outputs for periods from 100msec to 4 minutes in 13 steps. An 8 bar LED indicates the output state 1-7 while position 8 operates a PTT function. A CW message is sent after successful control and at this time a PTT function may be used to key a transmitter.

Output state is remembered after a power off/on.

The document file here describes the project in more detail. The HEX file and manual is here and the circuits are here. 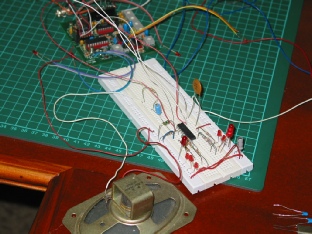 Not pretty, but the test setup uses a breadboard with the PIC16F628A, LEDs for checking operation and a loudspeaker for monitoring the tones.

Note the password in the HEX is set for 123 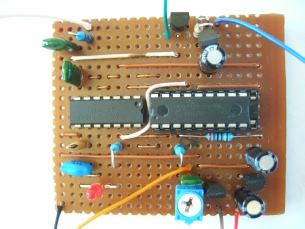 Dion, VK7DB, built this version for additional control of his local digipeater. No ULN2803.

George DV2GAP had difficulty getting the 8870 circuit going. This was caused by a software issue resulting from the fact that a MT8870 latches the data to the last digit. This has been overcome in the current version. A M8870 may be used as a replacement for the MC145436 once connections are taken into account.

Here is George’s nicely laid out circuit diagram. NOTE both circuits above have an error. Please swap over the wires to the ULN1803 to pins 3/4 and also those to pins 5/6.

The version from Istvan below does not have an error.

I’ve been working with Istvan (HG8GL) on some corrections. In addition it is now possible to set the period the PTT is active before the “R” is sent and the desired action is activated. The delay enables an operator to send the code, move to receive and hear that the command is successful. The default is 1 second.

Below is Istvan’s modified circuit using a M8870 and the board layout. He has included a Hungarian translation of the manual.

The above circuit has been modified from WW2R’s original and matches my software. I recommend it to you.

The circuit is available in the ZIP file with the hex and PCBlayout files. 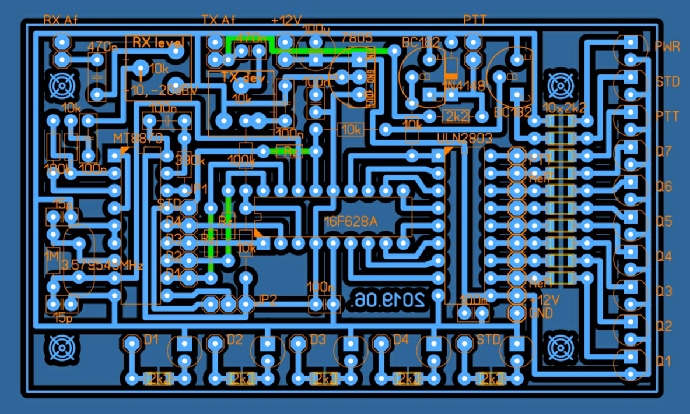 Note that there are two document files in Istvan’s ZIP, one in English and one in Hungarian. Commands are described.

A zip of Istvan’s work is here along with my hex file.