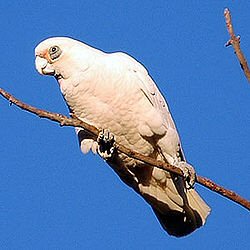 Keeping the beaks away

The Little Corella has reached plague proportions in some parts of Australia and my corner of South Australia has more than its fair share. It is a native bird.

The birds are attracted in thousands to this area during summer when the crops are being harvested and there is plenty of grain to be had in paddocks and spilled near silos. Once here they also feed on the new shoots in trees - especially gums.

They roost at night in the trees and their raucous cries keep people awake - they are a pest. However in the wisdom of someone, they are a protected species so shotguns are definitely out. In any case shot guns can do a fair bit of damage to an antenna too.

The problem for radio amateurs is that they love testing their beaks on almost any surface. They have been known to clamp onto an aluminium element and then walk around it creating a weak spot which, with oscillation in strong winds can result in elements breaking at the weakened place.

The ‘solution’ to the left makes use of two components.

The coax itself is protected by a length of special bird protection tube from a mobile phone cell site. The tube is hard and flexible, ideal to discourage beaks. When installing the cell’s aerials the crew often discard short pieces.

I used one 2 metre long length that was just large enough in diameter to slip over a female N-connector and over the RG213 tail.

This left the balun unprotected. Here a length of 50mm poly pipe (kindly provided by Chris VK5MC) was split and opened up as a balun cover. The split pipe was held in place by large plastic ties.

A couple more ties were added after this photo was taken.

The second photograph to the left shows the 12 element DL6WU Yagi for two metres in position at the top of the tower.

It is being tested by four starlings, that species flew in from Europe and has also become a pest. At least they don’t pick at coax.

Don’t get me wrong - I love our native birds, they are generally beautiful, have a great song and bright colours. Most of them don’t attempt to destroy my coax!

We have two Australian Magpies (their real name is Piping Shrike) that have made our backyard part of their territory. In fact I think they consider the backyard as theirs and consider us the pets, not they. Anyway the point was that they also drive the Corellas away so we have a two pronged strategy to protect the coax. Magpies warbling. 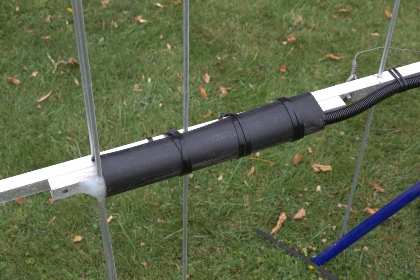 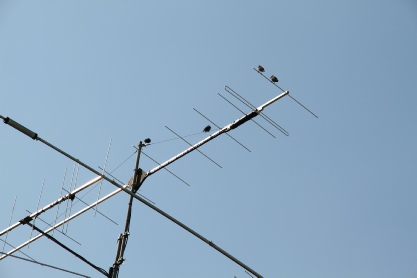